How to Avoid Road Rage and Aggressive Driving Accidents in Florida 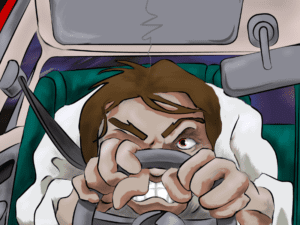 We’ve all encountered rude and angry drivers. And if we’re honest, most of us can admit to getting irritated behind the wheel before. But if those feelings affect our driving behavior, we become a danger to ourselves and others. Florida is one of the worst states for aggressive driving and road rage accidents in the nation.

What is Aggressive Driving in Florida?

Aggressive driving is a recognized issue in Florida — so serious that the state Department of Transportation (FDOT) Strategic Plan lists it as one of the most important problems to address to reduce traffic accidents. FDOT statistics show there were 2,020 deaths and 6,611 serious injuries due to speeding and aggressive driving over a recent five-year period.

Florida law defines aggressive driving as engaging in two or more of the following actions, either at the same time or in succession:

More generally, the National Highway Traffic Safety Administration (NHTSA) refers to aggressive driving as operating a motor vehicle “in a manner that endangers or is likely to endanger persons or property.”

People often think of aggressive driving and road rage as the same thing. However, there are some key differences.

First, aggressive driving is a violation of state traffic laws. There is no legal definition of road rage in Florida.

In addition, road rage accidents occur when a driver has the intent to hurt another motorist.
Aggressive driving is a negligent traffic violation, but the person committing the offense may be careless rather than aiming to harm someone else.

That said, many of the same aggressive driving behaviors are seen in people with road rage, such as speeding, weaving in between lanes, and sudden braking. But with road rage, you can also expect to see more inflammatory actions, such as:

Road rage and aggressive behavior are widespread. Consider these road rage statistics compiled from AAA, NHTSA, and other reports:

The report also listed a terrifying statistic for Sunshine State drivers: Florida is No. 1 in the nation for road rage incidents involving firearms. Tampa and Miami were the most dangerous cities.

You cannot control the actions of other drivers, but you can do your best to avoid being involved in a road rage accident. Here are some tips:

Get Help from a Car Accident Lawyer in Florida

If you or someone you love was seriously hurt in a road rage accident, you could be entitled to compensation beyond your no-fault benefits in Florida. Talk to a car accident lawyer at Brooks Law Group today. We’ll help you pursue the full and fair compensation you deserve.

This post was originally published in October 2015 and has been updated for accuracy and comprehensiveness in August 2021.