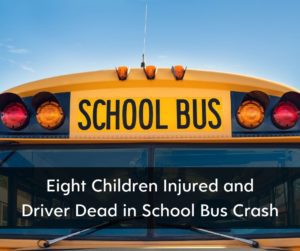 It’s early in the morning and you’re hurrying your children through the pre-school routine. Teeth brushed, clothes on, lunch packed and they’re ready to head out the door and to the bus stop. Millions of American families start their day in the same way every weekday. As soon as they’re safely on the bus, you know they’re safe and you can go about your own day.

School Bus Rolls Over with Children Inside After Crash

This is still a breaking story and many details have yet to come out, but here’s what we do know. On Tuesday morning, a school bus crashed and rolled over, coming to a stop on its side. In the wake of the accident, we know that eight children were transported to a hospital in Memphis. Four were set to be released yesterday, and another four were said to be in serious condition.

No other vehicles were involved in the accident.

School transportation crashes are tough to think about. Nobody wants to imagine that a crash could happen after they drop their child off at the bus stop. Fortunately, the occupants of a school bus are usually safer than any other vehicle they collide with, but it’s still tragic every time. Here are some statistics from the NHTSA on school transportation-related crashes:

When you put your child on a bus, you’re trusting the driver and your school to take care of them. That’s why it’s so upsetting to hear about school bus crashes. Thankfully, they are few and far between, but that doesn’t stop the fear and hurt they cause when they do happen.

Has your child been injured in a school bus crash? In this difficult time, you need a law firm that cares. You need a team of attorneys and staff that will put you and your family first. You need the Brooks Law Group.

We’ve been serving our community with personal injury, auto accidents and wrongful death claims for more than 25 years. We have the commitment, skill and experience needed to get you the compensation you deserve. Call our offices at 1-800-LAW-3030 or fill out our ‘Contact Us’ form online to start your journey to justice today!