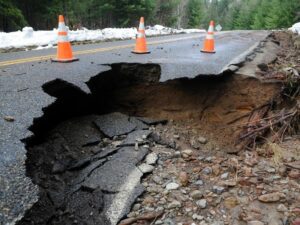 Sinkholes are common in Florida, and Winter Haven is no exception. Polk County alone is home to 567 known sinkholes, according to one compilation of state and county data. News reports indicate that around 1,700 new sinkholes open up in the Sunshine State every year.

Sinkholes can be a severe threat to public safety, swallowing up homes and creating sudden chasms in city streets. Residential collapses have injured and killed unsuspecting homeowners throughout the state.

Florida insurance laws provide coverage to structures when sinkhole collapses occur. But what happens if you are hurt in a sinkhole accident? Contrary to what many people believe, you could also have a personal injury claim.

Let Brooks Law Group determine whether someone else should be held responsible for your sinkhole accident injuries. Call or contact us to speak with an experienced sinkhole lawyer in Winter Haven right away.

What is a Sinkhole?

A sinkhole is an underground cavity that forms when water erodes rock formations. The dissolved material is often limestone or dolomite, two of the most common types of rocks found in Florida.

Limestone is porous and dissolves when acidic water passes through it. According to the Florida Department of Environmental Protection, rainwater is mildly acidic and gets more acidic as it travels through decaying plant materials. Over time, erosion creates underground pits that can turn into ponds, wetlands, or simply empty spaces. The danger to humans lies in the empty voids.

There are three main types of sinkholes, according to the U.S. Geological Survey.

Sinkholes can also be created by man-made activities, such as mining, drilling, and collapsed infrastructures like broken and leaking pipes.

Do Your Have a Sinkhole Injury Claim? Visit Our Office in Winter Haven, FL

Though sinkholes can tear apart the ground in an instant, there are telltale signs that can warn you of a potential hazard. These include:

If you suspect that your property or a neighboring property has a sinkhole, call the FGS Sinkhole Helpline at (850) 245-2118.

Liability for a Sinkhole Damage in Winter Haven, FL 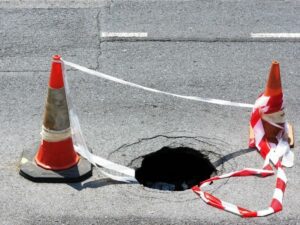 If you’ve been hurt or lost a loved one in a Florida sinkhole accident, you could have a legal claim if someone else’s negligence caused the accident to happen. Examples of potentially liable parties include:

Injuries from a sinkhole accident can be serious. In addition to medical expenses, victims may also face time off work, permanent disabilities, and extensive property damage, including the total loss of a home. You deserve to be fully compensated for your losses if another party is responsible for them.

Florida is the sinkhole capital of the United States, according to the state Office of Insurance Regulation. As a result, the state requires insurers to provide sinkhole coverage for catastrophic ground cover collapses to property owners. But not all homeowners’ policies provide specific sinkhole coverage.

Florida law also requires insurance companies to offer sinkhole coverage to policyholders, but it typically costs an additional premium. According to the Department of Financial Services, the property may also need to be inspected before coverage is available. The insurance company does retain the right to decline coverage if the property is located near a sinkhole.

To be compensated for catastrophic ground cover collapse in Florida sinkhole claims, the sinkhole activity must have:

Keep in mind that if the property did not experience catastrophic ground cover collapse or the property owner did not have sinkhole coverage, they may be on the hook for paying for any sinkhole accident claims out of pocket.

If you’ve been hurt in a sinkhole accident and someone else is to blame, you deserve maximum compensation for your losses. Trust the Winter Haven sinkhole lawyers at Brooks Law Group to fight for every dollar you are owed.

We know that the idea of filing a sinkhole claim can feel impossible. When you hire Brooks Law Group, you get a law firm with decades of experience representing injured Floridians in the most complex accident and injury claims. Rest assured that we have the knowledge, drive, and resources necessary to build a strong case on your behalf.

It’s simple to get started. Call or contact us for a free consultation. You’ll meet with one of our experienced attorneys for a private, confidential case review. After an initial look at the facts, our lawyers will discuss your legal options and rights to compensation. We’ll answer every question honestly and simply — breaking it all down without the legal jargon that makes everything seem more complicated and overwhelming.

Get Legal Help From a Sinkhole Damage Lawyer in Winter Haven, FL

For more information about how we can help with your sinkhole accident claim in Winter Haven, call or contact Brooks Law Group today.