Home Blog Why Are There So Many Fireworks in Florida?

Why Are There So Many Fireworks in Florida? 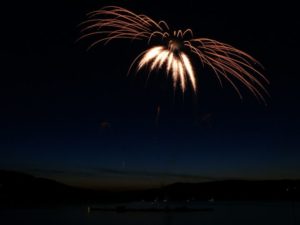 The 4th of July is a time for us to come together as family and friends to celebrate the independence of our nation. Independence Day is our country’s national day, and it commemorates the adoption of our Declaration of Independence on July 4th, 1776. No longer were the 13 American colonies members of the British Empire!

Independence Day has a close association with family gatherings, parades, political speeches, and, of course, lots and lots of fireworks. From giant displays of city-sanctioned explosions in Downtown Tampa to our noisy next door neighbors, fireworks are a staple of independence celebration. Aren’t they illegal though?

Since 1941, retail sale of fireworks to the general public in Florida has been banned for reasons of public safety. Fireworks are defined as anything that leaves the ground or explodes. Under Florida fireworks code (Chapter 791, F.S.), only sparklers and other novelty products may be sold.

There are, however, exceptions to the rule. It’s these exceptions in place that allow your neighborhood sky to be filled with the bright and booming explosions created by aerial shells, commonly called mortars.

Birds are the main exception. What do birds and fireworks have to do with each other? Annually, birds ruin millions of dollars worth of agricultural products in North America. For this reason, one exception to Florida fireworks code is the retail sale of fireworks to those intending to use them to frighten birds away from their crops.

When you purchase fireworks from the temporary tents that crop up all over Florida this time of year, you sign a form indicating your familiarity with Florida law on fireworks. Who knew we all had so many birds that needed scaring?

Fireworks are a staple of 4th of July celebration. Many of us have fond memories of firework displays on Independence Day. It’s worth remembering, however, that fireworks can be dangerous and it’s only through a loophole that the public is able to purchase them in our state. The U.S. Consumer Product Safety Commission (CPSC) keeps detailed records of fireworks-related injury and death in our country.

On this 4th of July, consider skipping the roadside fireworks tents you’re bound to pass. Unless you’re using them to scare pesky birds from your crops, it’s technically a first degree misdemeanor which is punishable by a fine up to $1,000 and a year in jail.

If you’re interested in a sanctioned display, we recommend checking out Downtown Tampa at 333 S Franklin St. from 9-10pm with your family and friends. If you plan on your own displays, remember to stay safe and check out our Brooks Law Group safety tips.

At Brooks Law Group, it’s our mission to “Provide the Best Client Experience Possible” to everyone we work with. Our attorneys work hard to provide you the best legal representation possible, while keeping you informed throughout every step of the process. If you or a loved one has been injured due to someone else’s negligence, call Brooks Law Group at 1-800-LAW-3030 today for a free consultation.