By now, everyone’s heard the message: texting and driving is bad. Very bad. Avoid it at all costs. What about just texting and … walking? Is that so bad? Yes, in fact, it is. Indeed, pedestrians who talk and text—“petextrians” as they are called—are on the rise, and so are pedestrian fatalities.

Prior to the widespread use of cell phones, pedestrian deaths were on the decline. In fact, between the mid-1970s to the early 2000s, pedestrian deaths dipped to about 11% of all traffic fatalities, according to a report by Governors Highway Safety Administration. However, since 2009, pedestrian traffic fatalities increased by 15%. It seems as if the meteoric rise in cell phone use—and in turn, pedestrian distraction—may be what is driving up that disconcerting number. As more and more people use cell phones, more people are getting injured or killed while walking and talking on them: in 2004, the percentage of pedestrians killed while on their cell phones was 1%. By 2013, however, that percentage had increased to 3%.

Not surprisingly, distracted walking might be the biggest problem with teenagers. According to an article by ABC News, almost 40% of teens have been hit or nearly hit by a passing car, motorcycle, or bike. Of that group, nearly all report walking while being distracted at higher rates than their contemporaries. For some reason, many teens see nothing wrong with using their phones while walking. When they feel the need to post something funny on Facebook, the basic lessons that they learned as a child about paying attention to cars while crossing the street are suddenly, and sometimes tragically, forgotten.

The problem isn’t limited to just teenagers, though. When any walker doesn’t paying attention to what’s going on around them—either by taking their time to cross streets, failing to look both ways for cars, or ignoring traffic lights—tragedy can occur very quickly. Distracted walking doesn’t just mean texting while walking, either: it encompasses looking down while playing a video game on one’s phone, walking with earphones in, or strolling while talking on the phone, in addition to walking while texting. Intersections are particularly dangerous, with more than 1 in 5 pedestrian deaths occurring there, according to www.safekids.org.

What can be done to combat this problem? According to the Christian Science Monitor, many cities are devising their own safety campaigns to address this menace head-on. Delaware highway safety officials implemented for a public education campaign by placing decals on crosswalks and sidewalks at busy intersections urging pedestrians to “Look up. Drivers aren’t always looking out for you.” Additionally, Philadelphia officials launched a campaign entitled “Road Safety, Not Rocket Science,” stating pedestrians should “pick head up, put phone down.”

Hopefully, these public safety campaigns will make some headway. In the meantime, please remember to put your phone down when walking, and urge children to do the same. Through combined efforts, this problem can be tackled head-on.

If you become a victim of any injury due to another’s negligence, call the skilled attorneys at Brooks Law Group today. We can determine whether you are entitled to any compensation. 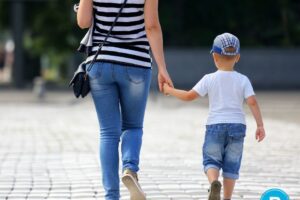 Polk County Ranked in Top 10 Most Dangerous Areas for Pedestrians