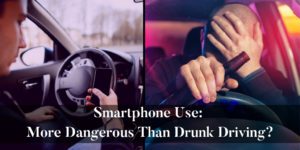 Driving under the influence isn’t only for drunk drivers anymore. There is a new dangerous killer in town: driving under the influence of phone use. For Distracted Driving Awareness Month, we’re taking a look at many of the distractions that make our roads unsafe. If there’s any doubt in your mind about how dangerous using your phone while driving is, we’re here to clear it up.

It may sound like an exaggeration, but it’s not. Drivers who use their phones on the road are the new drunk drivers. We’ve all been educated on the dangers of driving under the influence of alcohol, but that’s not the only killer that clogs our roads with serious accidents.

According to Zendrive, a company dedicated to making our roads safer through data and analytics:

We’re becoming more addicted, more reliant, and more dangerous because of our phones. It’s not news to anyone that using your phone while driving is dangerous. We’re surrounded by reminders of how deadly texting and driving can be. Why isn’t it changing how we drive?

We can’t pull our eyes away from our screens, even when we know that our life, or the lives of others, is on the line. There’s no better explanation.

We know that it can wait. We know that the world isn’t going to crumble around us if we take an extra 5 minutes to text a friend or call a family member. Yet, hundreds of thousands of drivers ignore their common sense every day.

What do we know about phone addicts and how they’re affecting us all?

It’s no wonder that we’re losing more lives to distracted driving every year.

Is using your phone while driving really worse than drunk driving? Are they even comparable? The answer is yes. There have been numerous studies conducted that show that drivers using their phones exhibit the same or greater impairment as drunk drivers.

Even worse, drivers under the influence of phone use are on the roads much longer than drunk drivers.

It can, and should, wait.