Home Blog Protests and Riots: How to Stay Safe in Civil Unrest

Protests and Riots: How to Stay Safe in Civil Unrest 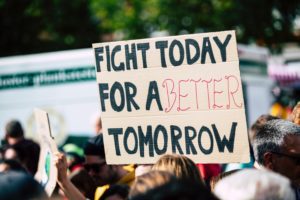 Since the murder of George Floyd in May 2020, many across the nation have joined both nonviolent protests and riots. During this time, people have been victimized by both demonstrators and law enforcement. As protests become more common, local streets seem to become more and more dangerous. With some forethought and understanding, it’s easy to remain law-abiding and safe, whether you’re demonstrating in a protest or not. Read ahead for our protest safety guidelines.

Click here to read our Reflection on Equality and Justice.

If you’ve watched television or used social media since May, it’s highly likely that you’ve heard of George Floyd. His death during an arrest was the spark that lit the flames of extreme civil unrest. But to be honest, there was already a lot of deadwood stacked up from previous, similar injustices. Since then a series of demonstrations, now known as the George Floyd Protests, have taken place across the nation, both in cities and suburbs alike.

This isn’t the first season of protests on injustice, especially in regard to police brutality and minority treatment. Unfortunately, it probably won’t be the last. In 2015, the Baltimore Protests took place for very similar reasons. All the way back in the 1960s, Martin Luther King Jr. led marches across the nation in a concerted effort against racial injustice. Marches and protests take place for many other reasons. Some are for minority groups like the LGBTQ+ community. Others fight for rights, like in the women’s movements in our past (and today).

If there’s one thing America stands for, it’s for the freedom of expression of all its citizens. Marching, protesting, and even rioting seem to be a language that is well-expressed and well-understood in America, all throughout history and certainly into the future. Whether you plan on participating or not, there are ways to conduct yourself that will promote the safety of yourself and others.

For those of you who want to take part in a social movement by demonstrating, be mindful of these things. Law enforcement, other demonstrators, and dangerous people, like domestic terrorists seeking to abuse the protest atmosphere, can all be dangerous. It’s important to be aware and act responsibly in order to avoid unnecessary trouble.

• Do not willfully engage in illegal behavior.
There are Constitutional protections for civil demonstration for this reason; illegal demonstration is unnecessary.

• Always comply with law enforcement.
Regardless of if the demands seem justifiable or not, place your individual safety first when prompted by law officers.

• Do not arm yourself.
Although this may appear counterintuitive, protests and similar demonstrations are emotionally charged. Because of this, the presence of weapons poses a much greater threat than they do otherwise. For your own safety and the safety of others, keep firearms and other similar weapons at home.

• Don’t be a hero.
If things go south, leave. Arriving late and leaving early at a demonstration is not a bad habit to establish, either.

The purpose of protests is not to create chaos, but instead to promote ideas. If chaos ensues, no one wins. If demonstrating, be tactful in your exercising of rights and make safety your highest priority.

Protest Safety for Those at Home

If you’re simply not interested in demonstrating or actively object to it, consider this very similar set of responsibilities. Just as a protester is exposed to the dangers of others, so, too, are regular citizens at home. Here’s how you can keep out of trouble if you’re trying to stay out of the situation:

• Stay home.
This may seem straightforward enough. But if you have no business with a social movement and no interest in participating, especially if you object to it, stay out of it. There’s no sense in being somewhere you don’t belong.

• Do not take the law into your own hands.
Constitutional mandate protects protesters and their rights for a reason, and law enforcement officers are dispatched to keep the peace. There is no reason to be out and about trying to enforce the law on your own behalf.

• Be mindful of events.
If there’s a protest happening on your street and you worry about what might take place, keep your distance. It’s okay to be stay away from an event like a protest, even if it’s down the street from your house.

The protest and civil movement scene is not for everyone, and that’s okay. Whether you’re demonstrating or simply observing, the most important practices are humility and respect. Whether you agree with a movement or not, we’re all people, and all are worthy of dignity and respect. That’s what our great nation is all about.

If you were hurt at a recent protest, as a demonstrator or not, you deserve to know your legal rights. You could be entitled to compensation for any injuries you sustained. Contact us at 1-800-LAW-3030 and our team of experienced attorneys will give you a free consultation. Remember to practice protest safety and make your voice heard!