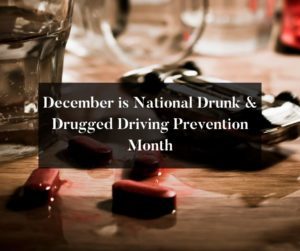 Well, December may be almost over, but the importance of this month isn’t limited to just December. This month is National Drunk & Drugged Driving Prevention Month. It’s also called National 3D Prevention Month. If you’re a frequent reader of the Brooks Law Group blog, then the topic of impaired and distracted driving will be a familiar one to you. This is a follow-up on a blog post we wrote earlier this week about staying safe this holiday season. As December wraps up, we want to highlight the importance of staying safe and why this month matters so much to us.

This month is dedicated to keeping drivers sober, alert and maintaining the best defensive driving practices. If you’ve been drinking or have taken any substances that might impair your ability to drive, you need to stay off of the roads for your safety and for the safety of others. Since 1981, each US president has demonstrated their commitment to ending the scourge of impaired driving by recognizing National Drunk and Drugged Driving Prevention Month in December.

What’s So Special About December?

December is the holiday season. It’s sandwiched right between Thanksgiving and New Year’s Day, and between those holidays and Christmas, it’s known to be one of the most dangerous times of the year to be on the roads. With holidays come celebrations. Many Americans celebrate the holiday season by attending parties or joining together with friends and family to drink. While most of us are well aware of the danger that driving impaired brings, not everyone is as reasonable or respectful of the safety of others. It’s a crime to get behind the wheel when you’re impaired, whether that’s from alcohol, illegal drugs or doctor-prescribed drugs. The bottom line is, if you aren’t operating at 100%, you have no business being behind the wheel of a car.

The Cost of Impaired Driving

The numbers don’t lie when it comes to driving drunk or impaired. This crime that is committed so frequently in our country robs us of thousands of lives every year. The accident statistics from the CDC are chilling:

This may not be the first time that you’ve read some of these statistics. However, if you plan on drinking this holiday season, I hope that they stick in your mind. There is nothing wrong with enjoying a couple of drinks with friends, but you’re putting the lives of others at risk when you take that out onto the road.