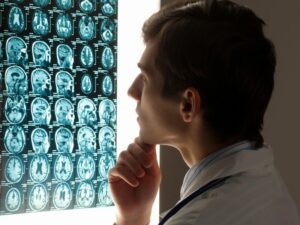 A traumatic brain injury (TBI) results from a sudden jolt or blow to the head. A TBI may also occur when an external object, such as a bullet, pierces the skull and enters the brain tissues. Depending on the severity of the injury, a TBI may heal within a few weeks or leave victims with complications that last a lifetime.

An estimated 260,000 people in Florida live with a TBI-related disability, according to WellFlorida Council, a public health nonprofit organization. Projections indicate that over 8,200 Floridians are expected to suffer long-term disabilities due to TBIs every year.

Most TBIs are due to accidents, such as a motor vehicle crash or slip and fall. If you or a loved one suffered a traumatic brain injury caused by someone else, you could be entitled to compensation to offset the astronomical costs accompanying these injuries. An experienced traumatic brain injury lawyer at Brooks Law Group can help identify your legal options and push for the best possible outcome for your case.

Our legal team understands the challenges that come along with a TBI diagnosis. When you meet with us, you get a committed lawyer who will listen to your story and work to find solutions that meet your current and future needs.

Concussion vs. TBI: What’s the Difference?

Traumatic brain injuries can range from mild to catastrophic. The mildest TBI is a concussion, which temporarily disrupts brain function. Usually, concussions are not life-threatening. However, they are still TBIs and should always be taken seriously.

Common signs of a concussion include:

A moderate to catastrophic traumatic brain injury is a different story. With a severe TBI, a person suffers much worse damage. According to the Centers for Disease Control and Prevention, severe TBIs cause thousands of deaths in the U.S. every year.

Symptoms of a moderate to severe TBI include:

Individuals with severe TBIs may often suffer from long-term disabilities and need ongoing care. A traumatic brain injury can also prevent people from working, driving, caring for their children, and doing routine tasks such as bathing and eating.

The lifetime cost of living with a traumatic brain injury depends on various factors, such as the severity of the injury, the age of the victim, and what type of assistance they will need after the accident. Treatment alone can range from $85,000 to $3 million, according to Northwestern University. That doesn’t account for indirect costs felt by family members whose lives are also rocked by a TBI.

Can TBI Symptoms Worsen With Time?

Yes. Some traumatic brain injuries can have a delayed onset. What feels like a minor headache after falling down the stairs could become unbearable pain hours later due to bleeding or swelling on the brain. That’s why it’s so important to seek immediate medical attention any time you experience a blow to the head.

Remember that you don’t actually have to hit your head on an external object to suffer a TBI. A forceful impact on the body could cause the brain to shift violently within the skull. The sudden shaking can cause life-threatening nerve and tissue damage, along with bruising and bleeding.

Can the Effects of a Traumatic Brain Injury Show Up Years Later?

Yes. The long-term impact of a TBI may emerge with time. The most famous example of this phenomenon is noted among football players, many of whom are diagnosed with memory loss and neurological problems at a far higher rate than non-athletes. One particular disease affecting football players is chronic traumatic encephalopathy (CTE), a progressive disorder stemming from repeated head injuries.

However, you don’t need to be a professional athlete to experience TBI symptoms long after an accident occurs. It can depend on where the injury occurred and what networks in the brain were damaged. Common TBI symptoms that emerge later may include a decline in cognitive function, mood disorders, concentration problems, sleep disturbances, sensory changes, and motor problems.

It’s critical to talk to an attorney as soon as possible if you are diagnosed with a traumatic brain injury in Florida. You only have four years from the date of the accident to file a TBI claim. Family members just have two years to file a wrongful death claim if the injury was fatal.

The first step in any injury claim is proving that an injury exists. Without proof of injury, you have no valid claim.

Traumatic brain injury cases are tricky. With catastrophic TBIs, there is often a surplus of evidence to prove an injury, such as MRI results, medical records, rehabilitation reports, and the observable results of the injury on the victim, such as cognitive and physical disabilities. However, not all traumatic brain injuries have visible after-effects.

TBIs are sometimes called “invisible injuries.” There may be no scar, wheelchair, or outward appearance of a head injury. Imaging tests may not even capture a TBI. But because the brain is the body’s computer, controlling everything from thinking to moving, any disruptions to those neural connections can cause significant impairments.

Your biggest challenge in a traumatic brain injury claim will be demonstrating how the TBI has affected your life. Your TBI lawyer can obtain evidence of your diagnosis and statements from your doctors, physical therapists, caregivers, and co-workers to support your claim. Your attorney may also hire experts to provide testimony that counters arguments from the insurance company that your TBI isn’t as severe as you claim it to be.

If you or a loved one suffered a traumatic brain injury caused by another party, you can and should hold them accountable for their negligence. Call Brooks Law Group today for a free consultation with a proven Florida TBI lawyer.