Are Motorcycles Safe in Florida? 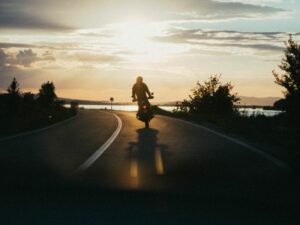 Many people believe that motorcycles are the most dangerous way for people to get around. But this isn’t necessarily the case. Motorcycles can be a thrilling way to travel, particularly in the summer months and in areas with good weather, like Florida.

Motorcyclists are indeed at a greater risk of serious harm on the roads. With less to shield them from the harsh impact of a crash, it’s common for motorcycle accidents to result in serious injuries. Understanding the motorcycle riding dangers that you may encounter on Florida roads can help prevent devastating collisions.

Unlike passenger vehicles, motorcyclists don’t have the luxury of airbags, seatbelts, and other safety features designed to protect motorists and their passengers in a crash.

Motorcyclists can wear a Department of Transportation approved helmet, a heavy leather jacket, pants, sturdy boots, and gloves to cushion themselves. But because they don’t have the physical frame of a vehicle to protect them in an accident, they typically receive the full force of impact, which can lead to severe injuries.

Many of the threats motorcyclists face are created by other drivers. Common dangers include:

Other common causes of motorcycle wrecks may be due to negligence by a city or state government or even motorcyclists themselves.

Advantages of Driving a Motorcycle

While there are inherent dangers in motorcycling, motorcycles also have advantages. These include:

Motorcycle safety is always important. So is compensation if you get hurt in an accident caused by someone else. If you were injured in a Central Florida crash, the legal team at Brooks Law Group has the knowledge and experience needed to investigate the accident on your behalf, calculate the value of your case, and aggressively pursue the financial recovery you deserve. Contact us today for a free consultation with a Tampa motorcycle accident lawyer.